After a lengthy meeting abstinence I just decided to attend at the Scratch2015-Conference in Amsterdam. Jens Mönig proposed it to me, since my exhibits on early computer art were created with Snap!. He said, this meeting would provide me for sure with many suggestions for my plans to continue remixing and recoding of such graphics. And he was right. I had some „Wow!“-experiences and have come back with a bag full of ideas. Here are the highlights.

The opening night in the impressive building of the ODA was coined by the keynote address by Cynthia Solomon, the grand old lady of the Logo movement (Computer Cultures for Children. From Logo to Scratch and beyond). Her haunting retrospect – illustrated with rare pictures from the early days of Logo development – showed how far-reaching the concepts were already in the early seventies, when the theoretical basis for the current activity around Scratch was established. Technically it has been implemented on seeming today almost bizarre dinosaurs of computer history. At the end Cynthia struck the bow skillfully to Scratch and showed how well she is still integrated into the community.

I was especially impressed by the keynotes  of Mitch and Beat, Linda and Eric . Mitch showed that Scratch is much more than a programming language, namely a now global learning community. He ilustrated this by various activities and extensions around Scratch and by the integration into the social media.

Beat pointed out (see his slides) that there are now many affordable devices with which the old ideas can be implemented more easily and widely than ever. And there are now tools

(such as Snap!) that (as an example he named the Lambda calculus) can lead to important informatics concepts. But he pointed out that the enthusiasm of the group of insiders has yet to be transferred to the parents, teachers, and decision-makers.

For that Linda Liukas was the living example. At the presentation of her book Adventures in Coding she radiated that optimism and enthusiasm that contributed well for the success of her kickstarter-campaign for the realization of her book.

That was for me anyway the defining feature of the conference (and significantly different from what I knew of the many scientific conferences during my professional activity): that contagious enthusiasm with which all projects were presented and the great empathy as this throughout was applauded, willingly to overlook possible weaknesses.

One focus of the conference were the many possibilities to work with robots, sensors and to interact via interfaces with myriad, often surprising devices. Too much to introduce it here, partly because my main focus was a different theme. But explicitely to mention is Turtlestitch, the project of Andrea Mayr-Stalder. She is controlling electronic embroidery machines with Snap! and thus she is practicing  and mediating creative textile design.

And now my personal „Wow!“-experiences.

Such an experience was the workshop and presentation of the BJC-curriculum by the team led by Brian Harvey. Although I am neither a computer scientist nor a teacher, as a complete layman, I was fully convinced of the theoretical approach, as well as of the practical implementation. This applies to the link with socio-political problems (the basic reading is the book Blown to Bits), and the centering on the „Big Ideas“, such as abstraction, recursion, concurrency. As Dan Garcia demonstrated this with a  concrete example, I was thrilled and absolutely determined to change some of my own examples accordingly. Thereby I will make them far more variable and powerful. 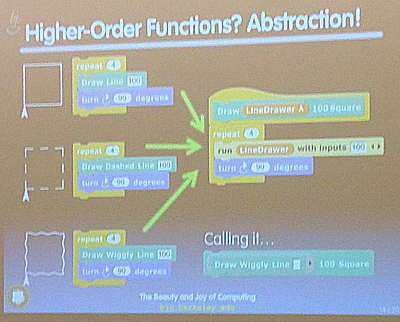 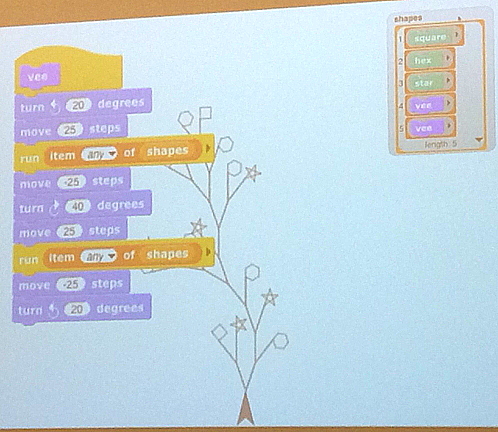 Next  the workshop of Bernat Romagosa about the Snap!-extension Snapi! provided me with Ideas for my computer art project. Snapi! allows to read open data and then to process and display them. Hopefully this is documented shortly more detailed somewhere so that even I understand. I could use it extremely well for a tribute to Morellet (who used the figures from the Paris phone book and transformed them graphically), using local data  to produce such graphics.

As a third highlight is then the GP workshop to be mentioned. GP stands for General Purpose. It is a new visual programming environment, which is far more powerful and efficient than Scratch and even Snap! It also will enable the development of apps for mobile devices. In the workshop we were able to experiment with the „pre-alpha“-version. Real strong, as it can be changed between visual and textual representation via a slider. To those who only speak of a „real“ programming language, if it is text-based, they are probably stolen their thunder (and Sniff thus actually gets superflous?). Also very funny that Jens contributed, among others, my gravel graphics (Homage to Nees) in the examples for GP. Unfortunately GP will probably be released only in one or two years; therefore I agree Derek Breen completely:

Not least, I was able to introduce my favorite project on computer art which is implemented in Snap!. In the evenings there were so-called teachmeets, ie informal deals in the style of an unconference. The participants have 2 minutes (nano-presentation) up to 7 minutes (micro-presentation) and they can register spontaneously. Actually, it is advised to participate without slides. Whose turn will be drawn with a wheel of fortune. I participated twice; on the first evening two minutes without slides. As apart from me everybody had slides, I started a second attempt on the second night, this time seven minutes with slides. In particular thus I could illustrate my subject computer art. Reward the effort was winning a DIY synthesizer in the lottery.

In the end I left Amsterdam with a suitcase full of ideas. The conference will certainly have repercussions on my projects and I will remain safe with some of the new personal contacts in exchange. My conclusion: Scratch2015AMS was a great experience and my thanks go to the organizing committee, representative of Joek van Montfort, who created this productive atmosphere.

Update 25.8.15: Now you can find the slides of my micro-presentation at the teachmeet in my slideshare-channel: